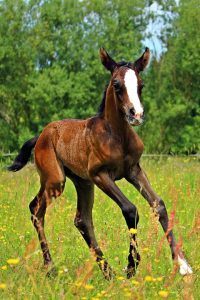 Nature generally has itself pretty worked out, the most amazing processes happen between mother and foal to ensure both of their survival. The way the mother lies down to get the foal into the correct position; the way the mare produces milk and how the process is triggered when she is about to foal down; the amazing position of the foal in its mother’s womb (it can’t be easy getting all those legs out of there!); and the bond between mother and foal for survival. But sometimes nature can get a little mixed up, and that is when we need to step in to ensure the safety and survival of the foal.

The term fostering is used when a foal is taken from their own mum and placed onto the care of another mare, known as a foster mare. Removing a foal from its mother is avoided as much as possible, but there are sometimes reasons why a mother cannot care for her foal, and fostering becomes the only option.

If the mare is unable to or has not produced the amount of milk that the foal requires, sometimes it is in the best interest of the foal to be placed with a foster mare. Foals usually drink from their mum every 2 hours and require a substantial amount of milk. Medication can be given to the mare to help her hormones regulate and to get her to start producing milk, but this doesn’t always work. A foal needs to gain an average of 1kg a day and without a good milk supply they are simply unable to do so, and will become ill very quickly. The only option is to get the foal to a better supply of milk in the form of a foster mare.

If the mare has undergone surgery such as colic surgery or any other major complications from before or during the birth and is required to be kept on box rest for a large amount of time, fostering would be considered for the foal. If we kept the foal with the mare, it would also be bound to box rest which is not ideal at such a young age. Foals need their exercise out in the paddock in order for their bones to mature nicely and become strong and stable. Of course if the mare is only required to be on box rest for a small amount of time then the foal would be kept with Mum, but its growth and development would be monitored closely. If the mare has undergone a major surgery it is also important that she be able to focus on herself and getting herself fit and healthy again, which she might struggle to do while providing for her offspring.

Long term problems in a mare may also cause an owner to consider fostering. Some mares with problems such as severe laminitis or other joint or bone issues may need to have their foals removed at birth if they are unable to care for them, or it would be dangerous to their health. The mare may struggle to provide or nurture the foal at a very important time of its life, and both would benefit from a foster mare taking over.

In some very sad cases, due to problems during foaling such as major ruptures or complete blood loss the mare may lose her life. In these cases a foal is put with a foster mare as soon as possible. Bottle feeding a foal is not a long term solution as they do not get all the other interaction vital for growth, and if bottle fed for too long they lose the ability to suckle naturally.

Lastly, and luckily quite an uncommon occurrence, if the mare rejects the foal after birth. Sedation and medication can be given to the mare to make her uterus contract again and make her think she has foaled again which works in most cases, but if it doesn’t the mare must be restrained and unable to get to the foal as she will likely attack it. The foal needs to be taken away from the mare as quickly as possible and placed onto a foster mare to avoid any injuries! Once a mare has had a foal there are a ton of hormones coursing through her body, if she doesn’t recognise the foal as her own, she still has the hormones and will not take kindly to a strange foal near her.

There are many different ways to foster a foal, each breeder has their own opinion on the best ways that work, and the ones that don’t. It all comes down to finding the best solution in the moment for mum and baby.

Foster mares usually have their own foals around 4 months prior to our thoroughbred breeding season. Meaning by the time they are required to foster, their own foal is older enough and strong enough to be taken from Mum.
The foster mare will then be sedated, a strong smell such as Vicks will be put on her nose to stop her from being able to smell the new foal. She will also be blindfolded and tied up to avoid injury to both her and the foal. This will only need to happen for around 24 hours before she is able to see her new foal, and accept it as her own. In most cases the foal to be fostered will have a rug placed on them with the scents from the foster mares own foal. This will help make the foster mare believe her foal is still with her and will accept it suckling. It is important to have an attendant sit nearby whilst this process is happening in case the foster does reject the foal!
Once the mare has accepted her new foal we continue to monitor the progress of both mare and foal. Some fosterings take a short time, the mare accepting easily and willingly, others take a little longer.

If all goes well, within a few days the mare and foal should be allowed out for some grass, it is advised to keep hold of the mare and allow the foal to have a run around. You will usually notice that if the fostering has worked the mare will start calling out to the foal when it goes a little too far away. This is a very good sign! The following day they should be able to be turned out together and the process complete.
You should continue to monitor the growth and weight gain of the foal, in some cases the foster mare will accept the foal and allow it to live with her but she will not support it feed wise. This means her bag will dry up and she will stop producing any milk but she will not be nasty towards the foal. Again, medication could be given to the mare to help her produce the level of milk the foal requires.

We generally like to try and keep mother and foal together, but sometimes circumstances prevent it. Luckily we are able to find a foster that will help raise a foal as her own, and continue the life cycle as it was meant to be. We are hoping for a good run this year with all mums and foals together and healthy!