Here at Gow Equine we have had the pleasure of foaling four mares this season, with one still to come! In our previous blogs we have spoken about the entire process from breeding stallion and mare, to the birth of the foal. Once the foal is born we need to give them every chance to become the champions we know they will be!

Angular limb deformities in foals are fairly common, and most foals who have only a slight conformation abnormality will correct and strengthen on their own with the right turnout regime. However, in some instances the foal’s deformation may be too severe and further procedures may be needed. Time plays a major part in the development of a foal, although we would like to see changes overnight this is not always the case with a poorly conformed foal.

We can diagnose different deformities by using the below as a guideline, and then decide on the best course of treatment, correction, or patience needed.

Carpal Valgus – where the limb deviates outwards from the midline below the knee.

Carpal Varus – where the limb deviates inwards from the midline below the knee.

Fetlock Varus – The right hind-limb deviates inwards from the midline below the fetlock.

For each of the more severe deformities there are various forms of treatment which will give the foal the best chance to survive and thrive.

Shockwave therapy – These are high energy sound waves which spread across the foals skin in the affected joint area to help create an inflammation response, causing the body to think there is a problem. This will then cause the foal to create further blood vessels to strengthen and help restore the joint. This treatment is usually carried out 3 times over a 6 week period.

Strip – This involves cutting into the bone lining of the affected joint to release any tension allowing the joint to move freely and re-align, hopefully in the correct position.

Casts – This is when the joint is pulled as tight as possible into the correct position and a cast placed around to hold it in place. This will mean that the foal should begin to build strength allowing the joint to stay in the place of the cast. This can sometimes be a slow process and cause sores if not checked and changed regularly.

Bridging/Screwing – A wire is placed through the affected joint with a screw to hold it in place. This will cause the side of the joint that is growing quicker to slow down and allow the smaller side to catch up. Once this has occurred the screw and wire will be removed allowing the joint to continue growing together. This type of correctional therapy is usually only used for very severe limb deformities or for foals that are close to reaching the time frame before the growth plates fuse.

The foal in the picture below was born quite weak and slack from her fetlocks down, an example of the Fetlock Varus deformity, where the right hind-limb deviates inwards from the midline below the fetlock. She had an extension applied to her near hind from an early age because when walking she would bear her weight the outer side of the hoof with a twisting motion. She was placed on restricted turnout of 5 hours per day in a small nursery to ensure not too much strain was felt in her joints.

She has had the extension for 6 weeks now, which prevents her hoof from turning in the wrong direction and allows her legs to grow accordingly without affecting any joints. As she is making progress she is now on full day turnout in a slightly larger paddock with another mare and foal. 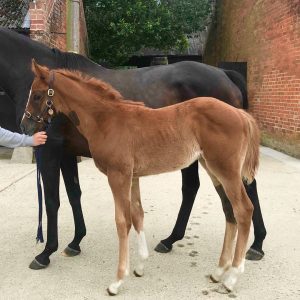 The second picture shows a foal who was born very back at her knees in front and had some trouble fully extending her near hind fetlock.

For the first few weeks after birth she was on a strict turnout regime in a small nursery paddock as we had to ensure she was getting enough exercise to help with the movement in her near hind fetlock but also enough rest to ensure she strengthened well in front. We saw a huge difference in her conformation within 2 weeks. 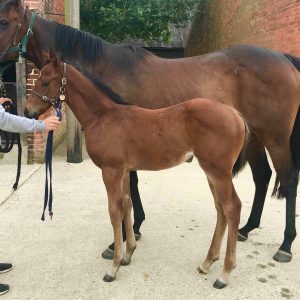 Both foals are now being turned out together and love having a play or catching some sun side by side! 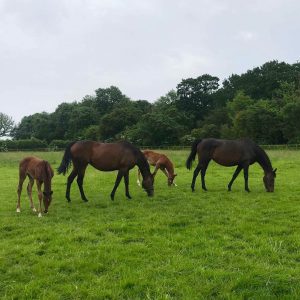 Our latest arrival on the farm, Frankel’s Nephew, has shown some great examples of the deformities we deal with in the breeding world, and the importance of time and a good turnout regime in treating them. 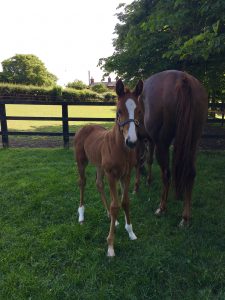 Frankel’s Nephew is a typical first foal, he was born very small weighing only 42kg and was also very weak through his front legs. It was obvious to see he had the angular limb deformity known as Carpal Valgus, where the limb deviates outwards from the midline below the knee. This was only a problem in his off fore knee, as his near fore strengthened up well in only a matter of days. He was on a restricted programme of an hour turnout per day and we have now managed to increase his turnout up to half a day. We are confident that time will be the best healer for him, along with the correct farrier treatment. We will continue to monitor his growth and development and would hope to see more changes in the next coming weeks. 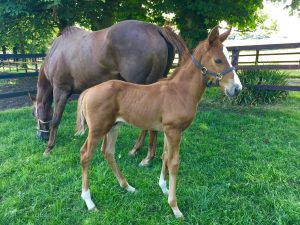