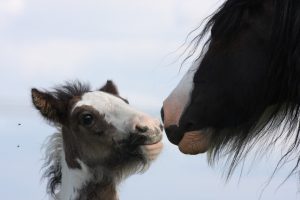 Preparing a mare for cover is a complicated procedure, there are many steps to follow to ensure that she is ready to be covered, and that she is in a top physical state!

To kick start the breeding procedure we first need to make sure that the mare is in season, meaning she is ready to carry a foal. The most common way of seeing whether or not a mare is in season is by teasing her using a teaser stallion. This allows us to see whether the mare is ready for the real thing, and saves a lot of time and money as generally a mare is transported to a stallion for covering.

Once the mare is deemed ‘In season’, the scientific part of breeding starts! All sorts of information about the mare and her physical condition need to be sent in for checking by a vet. First the vet will scan the mare’s ovaries to determine if any follicles are present and that the mare is within 24-36 hours of ovulating. An ovarian follicle is a fluid-filled sac surrounded by a group of cells that protect and nourish the ovum (egg); usually one of these follicles will develop during each oestrous cycle.

Once it has been established that there are follicles present, swabs are taken from the mare as the next step before she can be covered. These include:
– CEM (Contagious Equine Metritis)
– Clitoral swabs

Bloods are also taken to look for the following infections which may affect the mare, her foal, or the stallion during breeding.
– EVA (Equine Viral Arteritis)
– EIA (Equine Infectious Anemia)
– EHV (Equine Herpes Virus)

The owner of the mare has to confirm all these tests by signing a ‘Freedom from Infection’ form which the mare will need to travel with and present to the stud farm when arriving to see the Stallion. These tests will also confirm that the mare is free from strangles which is a contagious upper respiratory tract infection and incredibly dangerous. Swabs & Bloods are also required by a stud when a boarding mare is arriving on site for the purpose of getting a mare in foal or foaling down, which is when a mare is about to have her foal.

Once all swabs & blood tests return back negative a mare is deemed safe and able to be covered. The vet will then confirm the mare is close to ovulation and will be booked in to see the stallion on either the same day or the day after.

The follicle must ovulate after the mare has been covered and whilst the semen from the stallion is still active inside the mare. Once covered a vet will rescan the mare the following day to confirm ovulation. If the follicle has not ovulated it is then advised to send the mare back to the stallion for a cross cover.

The average gestation period for a mare is 11 – 12 months. Keeping the mare fit and healthy are vital during this time, to ensure a happy and safe pregnancy.

If you are interested in having your horses bred by professionals, contact GOW Equine  today! We have many years of experience, and more importantly, we just love it!